With drone use is growing at a rapid rate the need for drone school training and education has been recognised.

Now in the UK Drone Safe was launched to help ensure that drone users in the UK can easily access the information they need about how to fly their drones safely and legally, without endangering others.

It is a quasi government initiative with the website being developed by NATS and the CAA.

You can go and download the Drone Code PDF here.

The app is free on both IOS and Android and was first launched in December 2016.

It presents users with an interactive map of airspace used by commercial air traffic so that you can see areas to avoid or in which extreme caution should be exercised, as well as ground hazards that may pose safety, security or privacy risks when you’re out flying your drone.

It includes the location of ground based hazards that might pose a safety or privacy risk, such as power lines, schools or sports venues.

The app also contains a ‘Fly Now’ feature that enables you to share your drone flight location with other app users and the wider drone community, helping to reduce the risk of a drone related incident in the UK’s airspace.

In early 2017 they ran a national competition for primary school children to promote safe drone flying.  This competition was sponsored by

Amazon Prime air in conjunction with Drone Safe and the CAA.

Here is the national winning entry what great imagination children have: Just click on the image below to look at all of the other regional winners. 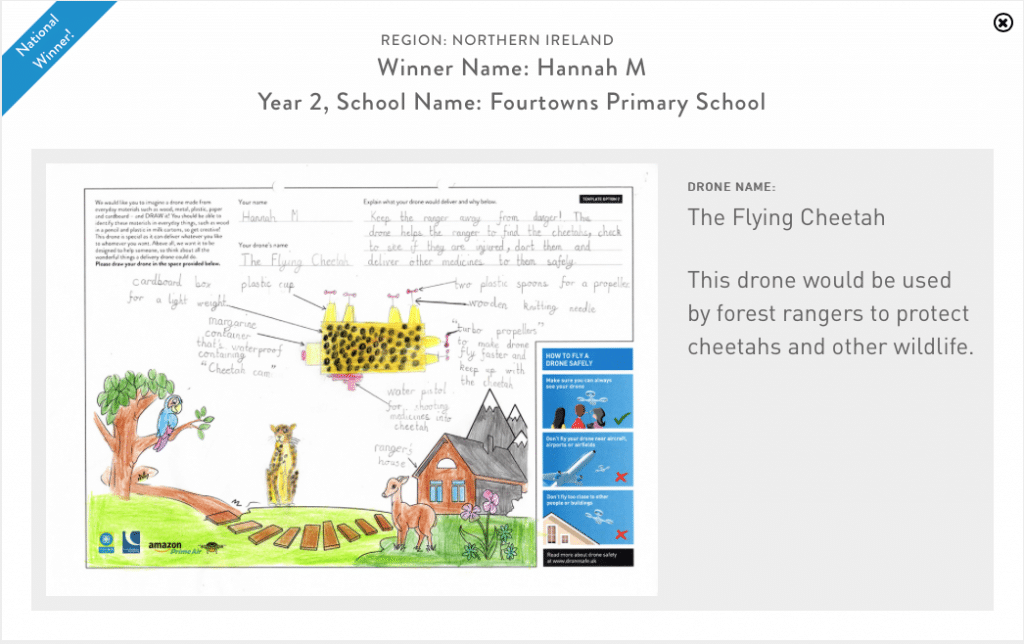 The UK Airprox Board, which investigates reports of aircraft near misses, reported on approximately 50 drone incidents in 2016 up from 11 during 2015.

Drones have become one of the most popular presents in 2017 so any public awareness initiatives and drone training must be welcomed.

At Drone School UK we do talk about this Drone Code guide in our drone training courses.  In a recent study by the CAA, 90% of people agreed that adherence to the CAAs Dronecode is important but only 40% of drone owners were aware of it.

There is considerable negative press in the UK about drone the latest article in the Telegraph on 22nd June promised a crackdown within a week on drones when reporting about a reported near miss on April 22nd as an Airbus A319 with 156 passengers was coming into land at Liverpool John Lennon Airport.  To date this has not happened.

Drone School UK is committed to providing drone training and drone flying education at six locations in the UK.